Every year I wait for the local drugstore to bring in its annual quota of holiday teas. The particular brand they stock every winter (and only ever bring in for the winter) offers flavors like Almond Biscotti and Carrot Cake and Black Forest Cupcake, and the best part is that the teas actually live up to their names when brewed, which is something that can be hit or miss for novelty store-bought sachets.

Anyway, there’s this one tea called Banana Cinnamon Spice which is basically banana bread in a cup and I love it and adore it and buy twenty billion boxes of it every December.

Every December except this one. 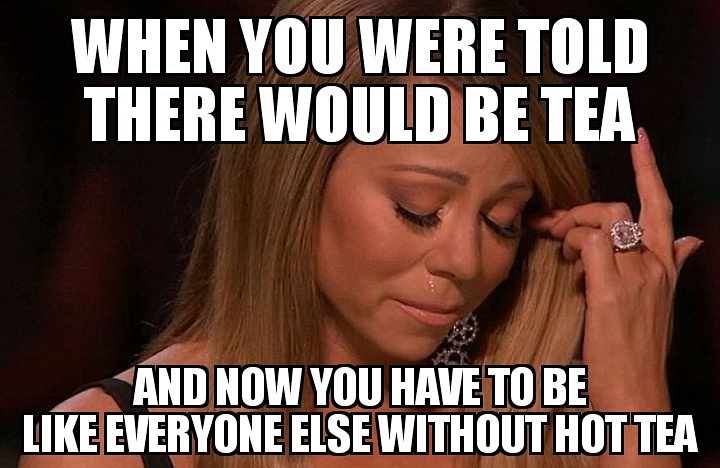 My liquid banana bread is nowhere to be found.

Because anything Nutty loves has to be taken away. It’s the law. Nutty likes it? Not allowed. Discontinue that shit. Nutty wants to buy it? Oooh, sorry, we don’t carry that product at this location anymore; have you tried Ontario or Nova Scotia?

This is why I stockpile. Nutty Hubby used to laugh at me for hoarding products I was afraid would be taken away too soon to that great big retail space in the sky, but then he began to see firsthand why it was necessary.

There was the piña colada flavored drink I loved that used to be sold in every convenience store in the city. First my regular store stopped carrying it, then my alternates, then even the little specialty hole-in-the-wall places that sold shit like bacon and celery soda quit stocking it. Nutty Hubby managed to find me two last bottles of it in a store by his work, and then that was that.

I am a curse on menus. If I like a restaurant dish enough to order it more than once, they’ll either change it beyond recognition or stop offering it altogether. I have been the killing blow for an unacceptable number of Nutty Hubby’s and my favorite appetizers. I have wiped some of the best entrees in the city out of existence. I am become death, destroyer of unique and flavorful side dishes.

One time I thought I lucked out. One of my favorite salmon dishes got a makeover, and for once I absolutely loved everything they changed.

They changed it back almost immediately.

I have been the harbinger of doom for countless hair products, bath products, makeup items, and candy flavors.

And now my tea is gone.

I had a minor panic attack last night at the liquor store thinking my most prized holiday beer (Whistler Brewing’s Winter Dunkel, if anyone was curious) had peaced out on me too, but luckily they had just changed the packaging a bit – and by “a bit” I mean it now comes in little dwarf bottle four-packs instead of the massive single bottles you used to be able to use as a defensive weapon in the event that anybody tried to take them away from you – so it wasn’t immediately recognizable. But I found it in the end.

Sadly, change of any kind has usually signaled the beginning of the end where it involves most beverages I have loved and lost, so I guess I’d better drink every bottle of this year’s haul as if it were my last. Because for all I know, it might be.

Every so often, though, miracles do happen. Remember how I’m a hoarder?

Guess what I found buried at the back of my tea cupboard when I got home? (Yes, I have a tea cupboard, don’t fucking judge me.)

Paranoid Hoarder Nutty to the rescue!

This needed celebrating. With tea.

I put the kettle on. I set out my favorite mug. The water bubbled; the Nut poured; the tea steeped. And then a little milk, a little sugar, a little Evan Williams, and…ahhh, liquid banana perfection.

…what? You don’t put whiskey in your tea?

Pfft. More for me, then.

15 thoughts on “Liquid banana bread and the disappearance of everything good in this world.”