I don’t know if I’ve mentioned this before, but I have spidey senses.
About spiders.

You know when you’re watching a horror flick, the feeling you get when shit’s about to go down? Like when the creepy music swells while the chick with the finicky flashlight is walking cautiously through the spooky house, and your heart is pounding because you just know one of these times when the camera angle changes, there’s gonna be a ghost-demon-thing right fucking behind her?

Or when it’s nail-bitingly obvious that the hot skinny dipping teens in the lake have only moments in which to keep giggling and making out with each other before some sort of Cthulhuian nightmare grabs somebody or other’s foot and drags them down into the deep?

Or when you see a bunch of children with 80s hair standing around a yellow kitchen and all the knuckle-whitening signs are there that the Kool-Aid Man’s about to burst through a wall and cost little Kimmy’s parents thousands of dollars in property damage?

Anyway, I have that about spiders.

I’ll be sitting on the toilet, or curled up in bed with a book, or checking the fridge for the 17th time in a five minute span to see if a large stockpile of chocolate mousse has magically appeared inside it since I last opened the door, and I’ll know.

There is a spider somewhere nearby.

But the spiders have their timing down to a science. They never come out right when my spidey senses start tingling. They wait. Until I start to doubt. Until a moment when I’m distracted enough to let down my guard.

But not really a surprise, because I fucking KNEW it was coming, and that just somehow makes it all so much worse. The knowing but still not knowing.

I would like to give this gift back, please and thank you. It’s not good for what remains of my rapidly dwindling sanity.

My spidey senses tingled yesterday morning as I was getting ready for work. I checked under the bed. Looked behind the dresser. Shook out the shower curtain and peered into the tub.

I shrugged and went to work. But I knew there was a spider in my near future.

It was a long day at the office. When I got home, I decided to take a nice relaxing soak in the bath. Still on high arachnid alert, I conducted an even more thorough search of the bathroom for before running the water, but there were zero signs of any eight-legged intruders. I tossed in a bath bomb and let the faucet flow while I went to pick out a book to read.

The water was silky and aromatherapeutic and just the right temperature when I stepped in. And spider-free. Let the record show that there were absolutely no spiders in the tub when I got into the water. I checked. Multiple times.

So why the hell, two chapters later, did I look up from my book only to see one slowly drowning by my big toe? 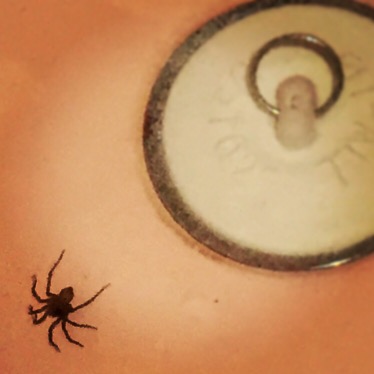 So yeah. There he was. And there I was. We sat there a moment, just being there together. Well, I sat. He continued to drown.

I don’t know how he got there. I checked everywhere. Unless God or Loki or Alanis Morissette or whoever is getting their rocks off by chucking spiders into my bathwater out of thin air, I cannot explain this sudden spider.

And indeed there may have been some sort of divine intervention at play, because I had the strange and entirely un-Nut-like passing thought that perhaps I should do the charitable thing and scoop him out of danger.

Instead I took a picture, pulled the plug, and waved goodbye with my favorite finger.

Bad enough the little fuckers are stealing my birth control, now they’re using up my bath bombs too? Bastard deserved it.