So since gas is expensive to the power of hella and I’m still at least one decimal place in my salary away from being able to afford to buy a Tesla, I do the occasional online survey to earn fuel reward points, because a 10¢ off per litre is currently higher on my priority list than my dignity.

The surveys are usually pretty innocuous if occasionally somewhat time-consuming, and just between you and me, trying to figure out how the hell I would rate the overall personality and trustworthiness of a particular brand of dish soap is a great way to look like I’m concentrating on something super important when I’m actually just bored out of my skull in the office. 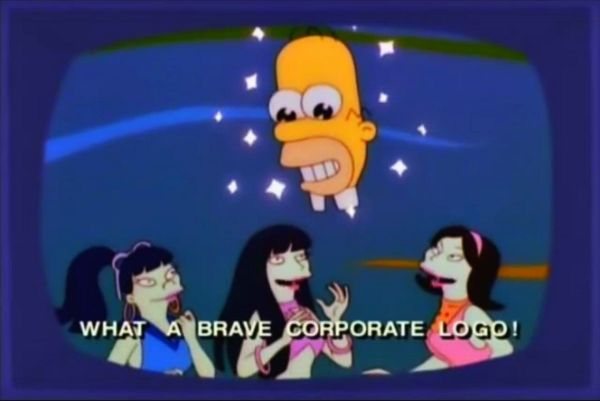 As one might expect, the questions are usually heavily focused on one single company or product. Does this meatless burger packaging have enough “kale-loving yogi” appeal? Would you be more willing to switch from soulless internet provider A to soulless internet provider B if they could install an ethernet port directly into your brain? How likely are you to recommend General John Johnson’s Grade AAA Panda Jerky to a friend or loved one?

Sometimes this means I’m not in their target demographic at all (hey, they can’t all be about panda jerky), and after a few questions I get a nice, “Well, thanks for your time, but as you’re not looking into purchasing an ethically sourced, wind-turbine-powered breast pump in the near future, we’re done here.”

And then sometimes there’s the odd exception to that whole specificity thing. 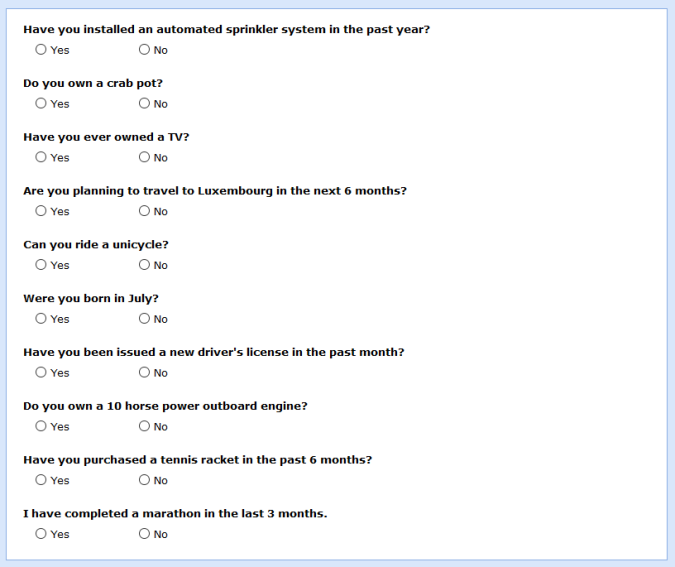 And I mean the REALLY odd exception.

I feel like there has to have been some mistake. Like the Most Interesting Man in the World’s email address is one letter off from mine and this was meant for him instead.

I find myself really, really wanting there to be someone out there for whom every answer to these questions is yes. Maybe they’re even on vacation in Europe right now, unicycling their way around the streets of Luxembourg with a crab pot balanced on their head because they’re the kind of person who can get away with crab pots as a fashion accessory.

You know the type.

Out of curiosity, I refreshed the page to see if this was a set list of questions or if shit would get even more random. And shit got more random.

Did I own a pet snake?
How about a ferret?
Had I been caught running a red light in the past six months?
Have I purchased a kayak recently?

I hit refresh about six more times, getting new questions almost every time, and literally the only ones I could honestly respond to in the affirmative were Have you ever owned a TV? and Have you been to a shopping center in the last three months?

I can’t be sure, but I think I just heard the Most Interesting Man in the World swivel around in a supple leather desk chair perched precariously on a remote peak of the Himalayas to shoot me a long-distance withering glance over his bottle of Dos Equis.

Okay, so I haven’t had sprinklers installed so I can play tennis on my beautiful healthy green non-existent lawn. So I haven’t fitted an outboard motor to a kayak to take my pet snakes for whirlwind rides around the coast. Not everyone has the luxury of driving recklessly while waving ferrets around and having July birthdays, okay? That doesn’t mean all I am is a dull TV-watching mallrat. It just means these survey people aren’t asking the right questions.

You know, like Have you bought a mandoline slicer off Amazon between the hours of 2 and 3am within the past week?
Or Have you consumed one or more bottles of late harvest Merlot by yourself over the course of a single evening while playing Overwatch in a fluffy turquoise bathrobe?
How about Do you own more than a dozen pairs of novelty socks featuring any species of bird?
Or even Do you spend at least ten minutes a day staring at the cracks in your washroom ceiling hoping the neighbors’ bathtub isn’t going to crash through and flatten you while you’re showering?

‘Cause, I mean, that’s 4/4 resounding yeses right there.

Your move, Most Interesting Man.

30 thoughts on “Snakes on a 10 horse power outboard engine.”