Jesus pancake-flipping Christ, how I hate those three little words.

I positively loathe how the internet, something that has brought us such opportunities for communication and expanded knowledge and access to some really cool and random shit, not to mention all the pictures of cute cats our fluttering hearts can handle, has apparently devolved so many of us back into little squabbling children who haven’t yet learned the value of quality over quantity.

In 1995 Alanis Morissette famously sang about “ten thousand spoons when all you need is a knife”.

And at the time, everyone was like, “You’re being ridiculous, Alanis, none of this is ironic at all.”

If that song were back in the spotlight today, I kind of feel like the biggest argument against it would be Alanis not appreciating the sheer number of spoons she’d managed to accumulate.

I can’t believe I’m saying this, but I almost miss the days when 50% of the comments on YouTube were some variation of “lol faggot u r gay”. At least offensive hate speech is still saying something, after a fashion. I can even kind of understand the motive behind the perpetually tiresome “FIRST!” comment. But what exactly is the current trend of thumbs-up mongering supposed to be bringing to the discussion?

WHY are people so obsessed with these meaningless numbers? Having a nervous breakdown if they lose one of their 6,000 friends on Facebook, maybe two of whom they’ve actually had a personal conversation with in the past month. Spending years accumulating 20,000 followers on a personal Tumblr which is just reblogs of other people’s work and not any of their own original content. Begging for likes in the comments of a video that someone ten million times more creative and interesting made. What does anybody get out of any of that?

Not a goddamn thing, from where I’m standing. Not anything that matters, anyway. 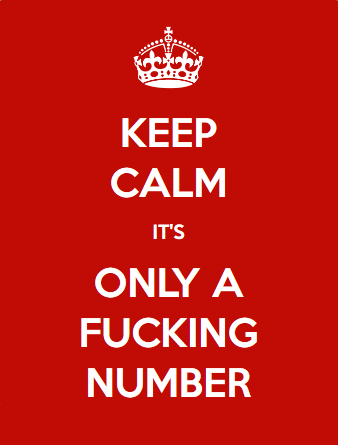 As far as I’m concerned, “I follow back” is just a concise declaration stating that you have nothing of actual worth to offer the world. That I shouldn’t care if you subscribe to my blog or my Tumblr posts or my tweets because you’re only following out of duty, not interest, and that I’d be a colossal idiot to hope for any kind of real engagement from you on a personal level because according to you, our only value lies in serving as filler material to make each other’s readership look more impressive than it actually is.

Forgive me if I don’t appear to be jumping at that once-in-a-minute opportunity, but I am not a packing peanut. I am a REAL nut.

I mean, why does anyone get suckered in by this shit? It’s like showing up to the Olympics and immediately holding a press conference in which you gush to everyone about your ongoing use of performance-enhancing drugs.

Except, for some inexplicable reason, instead of being followed by a public outcry about how reprehensible doping is, everyone just oohs and aahs over your physique and decides that steroids can’t be that bad after all if they gave you such a killer bod.

Haven’t we learned by now that looks aren’t everything?

(RT if you think food is yummy.)

Quite honestly, I appreciate it when someone unfollows me. From the bottom of my heart. Because at least it means they were paying attention. I’d much rather have someone give up on me because I’m not their cup of tea than have an indifferent +1 hanging on like a benign tumor.

So go sell your soul someplace else, follow-backers, ’cause I’m not buying. I’ve got enough dead weight to lose without your help.

I am in mourning for a plate.

That’s not a metaphor. I am genuinely grieving the loss of a dinner plate.

This isn’t a fresh grief, this hurt has spanned decades. And although I know it’s just a piece of dinnerware, honestly, I don’t expect to ever fully recover.

It was a damn fine plate.

I blame my childhood (don’t I always?). See, when I was a kid, and we were still living in the house I grew up in, we had this beautiful set of (now-)retro stoneware. Hued in a burnished hybrid of dark olive green and storm cloud grey tones, the plates and mugs had an appearance and texture similar to polished soapstone that I just couldn’t get enough of.

The mugs were otherwise unadorned. Which was fine. They were sturdy and had nice lines to them and they were everything a good mug should be. But the plates were patterned, a whorl of teardrop shapes in marbled blue-green glaze radiating out from the center, and I thought this was just about the most beautiful thing ever.  The overall visual effect of the design was like looking down at a deconstructed dahlia that had died of joy after soaking up the entirety of the Caribbean sea.

Anyone else hear Enya singing?  Photo © Glass Half Delicious 2014

I could have stared at those plates for hours, tracing the designs. That’s what happens when you’re an only child and have to make your own fun.

Sadly, despite my practically hypnotic attraction to the teardrop plates, my parents favored our lighter Corelle dishes (in the wildly underwhelming Butterfly Gold and Indian Summer designs, no less) almost exclusively over the heavier stoneware for everyday use.

The mugs came out of the cupboard for two main purposes: colds and cooking. At some point in time it was universally agreed that their pleasant texture made them the perfect vehicle for serving hot chicken broth to a sniffly member of the household, and it ruined me for all other soup vessels. I can’t explain it but I swear soup never tasted so good as when it was slurped from one of those goddamn mugs. Mug magic, people. It’s real.

And when they weren’t on germ-fighting duty, the mugs were used as a handy dandy cup measure for baking… and pancake making.

Oh, the pancakes of my youth! They were many. On school days I could never seem to manage to choke down more than a glass of milk before heading out the door, but on weekends I was a breakfast devotee, and pancakes were always my #1 request. Cereal and scrambled eggs had their moments, but as far as I was concerned,  Aunt Jemima might as well have been God. 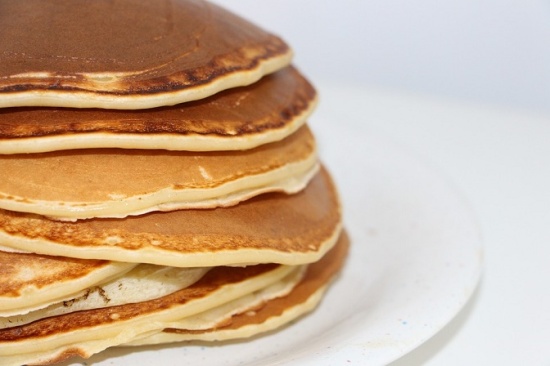 Oh sweet Lady of all things fluffy and golden, lend unto me this day thy Butter Lite.

So more often than not, I’d spend my Sunday mornings watching with rapt attention as Mom or Dad pulled the giant box of buttermilk pancake mix out of the pantry and got cracking. But not before putting the stoneware plates in the oven to warm, so the flapjacks piled on them would stay toasty.

Pancakes! And on my favorite plates!? All was well with the world.

I was fifteen and in the middle of a deep depression when they bought the new house. I doubt I would have noticed if an asteroid hit me, I was so out of touch with everything going on around me. I don’t even remember packing. All I know is one day I lived in one house, and the next day we drove to another and I lived there instead.

So it was a while before I noticed that my beloved plates were gone.

I never asked what happened to them – it wouldn’t have made them magically reappear or anything – but they were definitely gone, either thrown out or given away. I hope it wasn’t the former. I do know that at least one of the cups survived; my parents use it for scooping dog food now. A demotion from its soup and pancake days, perhaps,  but at least I can rest assured that it’s not lying in sad shards somewhere.

But my plates…I have never found their equal. Even eBay and Etsy have failed me in that pursuit. Even Google can’t find me a picture of them, just to let me gaze upon their loveliness one last time.

And every time I think I might have finally moved on with my life, without fail I’ll come across a recipe that calls for keeping a plate warm and ready in the oven, and the feels come flooding right back.

CURSE YOU, CHURRO RECIPE! WHY DIDN’T YOU COME WITH A TRIGGER WARNING?

I know have to accept that they’re gone.

But they will never be forgotten.

Godspeed, beautiful plates, wherever you are.

Anything mundane that you miss irrationally? Come cry on my shoulder, I’ll understand.