Every so often, Facebook likes to crank its stalkerishness all the way up to 11 and dig out one of my old status updates to surprise me with in my news feed.

Because clearly there needed to be more things on the internet that make my skin crawl.

They claim these zombie posts are being resurrected in the name of nostalgia, but frankly all they do is remind me of is how fucking boring I am. END_OF_DOCUMENT_TOKEN_TO_BE_REPLACED

You know the rules.

You know the instigator.

So let’s get right to it.

Today’s quote is courtesy of a customer I had once during my retail days. A short and to the point reminder that your attitude is what you make it.

I couldn’t help but laugh. You had to at least admire the old guy for his candor. Lord knows we’ve all had those days where we’re just determined to take everything the wrong way; be down in the dumps; avidly pursue a state of dissatisfaction. Sometimes there’s a odd kind of pleasure to be found in rendering oneself deliberately unhappy.

And that’s okay once in a while – just so long as we don’t make a habit of it.

And so arrives Day 2 of the Three Quotes, Three Days challenge, or as I like to think of it, using the words of those wiser and wittier than me to take a vacation from thinking up anything clever of my own. Thanks again to Christina of The Wordy Rose for the friendly kick in the butt.

If you’ve already forgotten how the rules work, see yesterday’s post. I’m not rehashing all that shit again just because you weren’t paying attention. Sheesh.

Today’s quote comes from…somewhere. I’ve seen it questionably attributed to George Carlin and Mark Twain, among others (Twain wrote something fairly similar, and Carlin did spend a lot of his time talking about stupid people so I can see why he’d be a logical choice), but nobody can seem to show their work, so I’m just gonna chalk this one up to the Universe. Nice one, Universe. 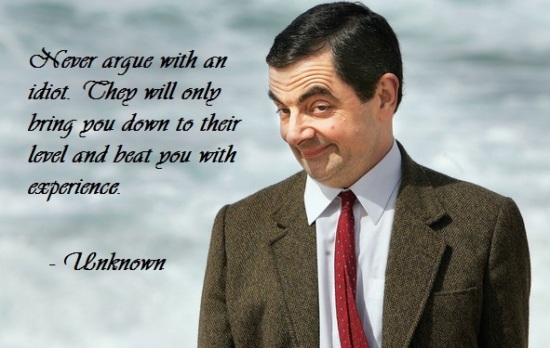 I don’t generally give much credence to star signs, but I’ll still be the first to admit that I do in fact have all the stubbornness of a Taurus and then some.

Which is to say I learned this lesson about idiots the hard way.

I didn’t have such a bad time of it before the internet came along. But then, y’know, the internet. An endless miasma of antiquated views, religious fanaticism, prejudice, conjecture, and questionable grammar at my fingertips, and I’m just supposed to stand idly by and watch?

The most painfully accurate XKCD of all time.

Facebook debate about the morality of same-sex relationships? You’re on.
Article questioning a woman’s right to choose? *cracks knuckles* Bring it.
Bigot with two brain cells and a YouTube channel? To the comments!

Just kidding about the YouTube comments. That’s a kiddie pool of crazy even I wouldn’t dip my toe into.

But I was still a sucker for the rest.

I don’t know how many hours of my life I wasted in futile games of cat and mouse with people who were actually proud of their own ignorance, but it was too many. This time, I would think, this time I will find the perfect way to word things so the light bulb will go on in their head and they’ll see reason! And after every “this time” failed, there was another waiting just behind it.

Still, even the most stubborn person eventually runs out of “this time”s.

I was in the middle of writing some stupidly long Facebook comment when I finally snapped out of my delusion. I can’t even remember what we were debating. And I don’t know what was so different about that day as opposed to any other day. But I recall looking at my words, then looking back at the words that had set me off, and having everything just click.

Wait just a goddamn minute… You know what? Fuck this.

There will always be stupid people. And that sucks for us all.

But it’s not your job to fix them.

They don’t want to be fixed anyway. They are far more committed to being stupid than you are to talking sense into them. You are not a lesser person for giving up, you are just making more effective use of your time.

So let it go, go eat an Oreo, and get on with your life.

What are you waiting for? GO!

Quickly, before I could change my mind, I highlighted my meticulously worded wall of text, took a deep breath, and pressed Delete.

Immediate relief washed over me. I didn’t feel like a failure. I felt more like a genius. A belated genius, perhaps, but better late than never.

It was so satisfying, I almost didn’t even need the Oreo.

So the lovely Christina over at The Wordy Rose made the kind gesture of nominating me to participate in the Three Quotes, Three Days challenge despite the fact that I a) am terrible at following rules, and b) don’t normally do the whole “thoughtful” or “profound” thing here because when I do I get in trouble for making people sad.1

But I do enjoy a good quote, so what the heck. Let’s do this anyway. I’m sure we can get through it with a minimum of tears.

And now if everyone would please follow me, we’ll head back to 1999 when that joke was funny.

Anyway, Rule #1 is actually to post three quotes in three days, because apparently the rules were penned by Captain Obvious.

Rule #2 says to nominate three other bloggers per day to participate in the challenge too. I’ll be taking a pass on this one because it feels chain letter-ish and I always hated those, not to mention I know some of you have already done the challenge, so as my lame nod to Rule #2, just consider yourselves welcome to participate if you feel the pressing need to go on a quoting binge.

Rule #3 is to give a nod to the blogger who nominated you. WAY ahead of you, Rule #3.

So. Them’s the rules. Now what? I guess this is the part where I pull a quote out of my ass.

And today’s lucky winner is… 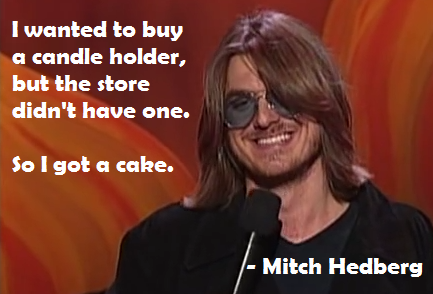 Okay, so this first one isn’t exactly Shakespeare.

But I love it, and pretty much everything else Mitch Hedberg ever said, because the man was the king of seeing the world in unexpected ways. He was pure out-of-the-box thinking on crack, and that pretty much describes my brain’s standard methodology right there. Organized tangential reasoning.

The quoted joke in particular reinforces something I’ve believed my entire life: if you want to accomplish something, don’t let the established norm narrow your vision. Standard procedure likes to try and convince you it’s the only way to go, but what in this life is ever truly standard? Be weird. Be wonderful. Blindside a problem with an utterly ridiculous solution if the logical ones aren’t working. Any way (within legal limits, of course) is okay as long as you end up with a result you’re happy with.

And if that result is delicious and covered in frosting, so much the better.

1 I know, I know, many of you also said it was a great piece of writing, but I can’t make fun of the part where you guys actually like my stuff, now can I?

I’m trying to be a functional human being.

Everything hurts. I’m shuffling around like a little old lady because I don’t have the energy to lift my feet and work is the clusterfuck that keeps on sucking and I just want to disappear to an island in the Caribbean and drink enough rum to kill Captain Jack Sparrow.

I want to write, but all my ideas feel dull and uninspired.

I am trying to appreciate the little things that make it all bearable. But a few kind words scrawled on a mailbox here and there can only be stretched so far.

So I have a favor to ask. ‘Cause y’all are awesome and you make me happy, and I want to give the happy back but I’m stuck and I need some outside motivation.

To that end, I will love you forever if you do one of two things*:

2. Set me a challenge. Send me a word, topic or question you would like me to write about. Sincere, sarcastic, out there, personal, TMI, WTF…whatever strikes your fancy, and I will make it happen. C’mon. I need a good kick in the ass. You, (yes, you!) could be that kick in the ass.

I guess there’s also option 3, which is to tell me to fuck off and die, but I already have Tumblr for that.

*To clarify, I will also love you forever if you do both things. I would give you a bonus for doing both but unfortunately I don’t know of any way to add more time onto forever, so that’s all you’re getting. Take it or leave it.

Sometimes, when I’m tired and in pain, and my energy feels like it’s locked away in a vault a million miles under the ocean, I thank my lucky stars that I live in a place where this is a thing.

Figured I’d share in case anybody else needed this. I know I did.